Since the theme for day-12 is whatever tickles my fancy, i would like to write about something interesting happened in my life recently. I was featured on front page of Metropolis, Jawa Pos two days ago!

Couple days before, i was interviewed by a lovely young lady who is a journalist of Jawa Pos, the biggest newspaper in East Java and also one of Indonesia's major newspaper. The interview, as well as the photoshoot, was held in my radio's studio, DJ FM.

It was an-hour-full-of-laugh interview. I told her about my personal story, how did i become an announcer, a presenter and how i managed my time in the radio, television, hospital and of course, as a mother and wife.

This is the complete version of the newspaper. 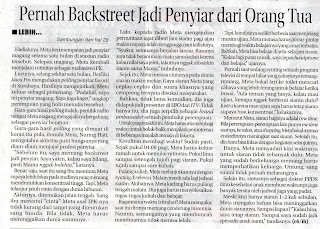 Thank you Dinda for the article, its nicely written;)
Diposkan oleh Meta Hanindita

Email ThisBlogThis!Share to TwitterShare to FacebookShare to Pinterest
Label: Medical Stuff, On Media