In a great detail, today was kinda awesome!:p

I woke up at 3 AM after faint due to night shift the night before. Me and husband had sahur together, and after that i sat in the front of laptop trying to finish my journal presentation. I went to the hospital at 6 AM. Actually, my shift started at 7.30 AM, but if i wanted to have a parking lot for my car, i gotta come very early i have to wait for one and a half hour.I really hope that someday this parking-lot-issue would be managed very well. *fingerscrossed*

I worked in the general pediatric outpatient clinic until 1.30 PM. I had some patients, mostly were having fever, diarrhea, and common cold. But i did have one patient with severe malnutrition. He was 5 years old, but weighted only 10 kgs! At the first time i saw him, i thought he was as old as Naya. His parents were actually not that poor, but i think they were not enogh educated. He was breastfed since born until now, without any supplementation, and he was never eating anything! It really broke my heart to see this little boy could not even bare his own weight. He could not stand by himself, he could not walk, he could not sit either:'(

Anyway, after finishing my duty there, i took blood and urine sample of a patient for my research. Then i went home. I had a promise to Naya that i would take her to the mall. So there we went just for some minutes.

An hour before ifthar time, i went to Graha Pena to have a talkshow where i were the host. Its been a long time since my last shooting;) I was a lil bit nervous, but i think i did it well:)
The talkshow was about health, there were so many questions came up from the audience bu phone. Its kinda fun. Geezzz i missed shooting!:p 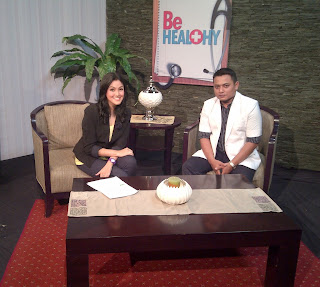 There was my day in a great detail;)
Diposkan oleh Meta Hanindita

Email ThisBlogThis!Share to TwitterShare to FacebookShare to Pinterest
Label: On Media