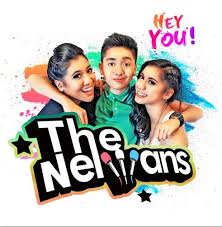 Have you ever heard about The Nelwans?
They are the new youtube-rities, celebrities that were found from Youtube.

Several weeks ago, i searched for a cover version of Maroon 5's song Payphone in the youtube and i found their cover version. Its awesome! They are still young, gorgeous and have good voices.
I even think that they could sing a better version than the original singer. Ooops, sorry my dear Adam Levine!:p

Meet Athina, Bianca and Christoffer Nelwan. The two formers are twins, while the only boy there s their youngest brother. If you see them, probably it will feel like dejavu. You think you might be knowing them somewhere before. Well, probably you're right. Athina and Bianca along with Shinta, have a girls vocal group named Aiko and have their own single and video clip. Athina had also several times performed in Symphony Metro TV. While Chris joined the Laskar Pelangi Musical couple years ago.

The Nelwans already have their own single, "Hey You", and they were invited to perform in TV show such as Dashyat or Sarah Sechan. They're cool!

Email ThisBlogThis!Share to TwitterShare to FacebookShare to Pinterest
Label: ETC